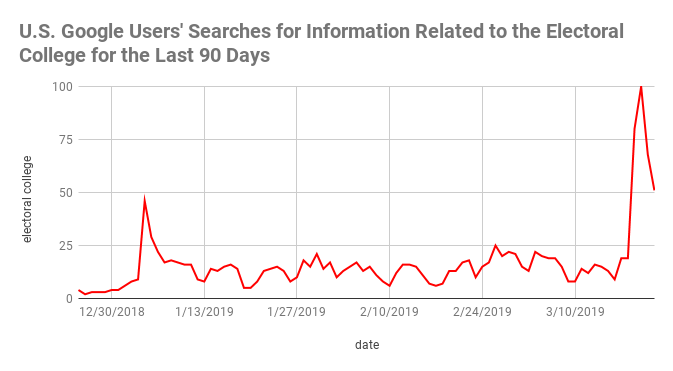 To win the presidency, a nominee has to earn a minimum of 270 electoral votes, rather than a majority of votes cast. This is not the place to review the history of the Electoral College (EC), but it is important to keep in mind that it totals 538 votes. Each state and the District of Columbia gets a proportional share of these electoral votes, according to the following formula:

The EC is a much-maligned system. In a recent town-hall, Massachusetts Senator and presidential hopeful Elizabeth Warren explained why she wants to get rid of the EC and let Americans vote directly for their president. Here is one of Senator Warren’s tweets summarizing her position:

Every vote matters. We need to get rid of the Electoral College so that presidential candidates have to ask every American in every part of the country for their vote, not just those in battleground states. #WarrenTownHall pic.twitter.com/UT3mYHXHQ2

Even President Donald Trump, who won the EC but lost the popular to Hillary Clinton by almost 3 million votes, entered the debate, sharing his thoughts on Twitter.

….just the large States – the Cities would end up running the Country. Smaller States & the entire Midwest would end up losing all power – & we can’t let that happen. I used to like the idea of the Popular Vote, but now realize the Electoral College is far better for the U.S.A.

What do Americans think of the EC? Do they want to get rid of it? Last summer, the Public Religion Research Institute (PRRI) conducted a poll that found that close to two-thirds of Americans want to directly elect their president by popular vote. It also demonstrated that Democrats strongly favored getting rid of the EC while Republicans’ attitudes are mixed. A Rasmussen survey of likely voters carried out in early October 2018 did not corroborate the PRRI’s findings. Only 46% of respondents favored “eliminating” the EC. In December 2016, Gallup found that 49% of Americans wanted “to amend the Constitution to allow for a popular vote for president”, but this was lower than the 62% of respondents who in 2012 wanted to get rid of the EC. In addition, Gallup’s research also suggested that 81% of left-leaning and 19% of right leaning Americans wanted to do away with the EC.

While many Americans are dissatisfied with the EC, amending the constitution is unrealistic in today’s hyperpartisan environment. So what can we do?

One solution, as Jamelle Bouie recently argued in the pages of The New York Times, is for states to join the National Popular Vote Interstate Compact. This initiative is quite simple. It requires states (and the District of Columbia) to pledge their delegates to the winner of the national popular vote. So far, 13 states, equaling 181 electoral votes, have passed legislation supporting this project. But the system goes into effect once the initiative attracts 270 electoral votes.

While other states are considering joining the Compact, the biggest hurdle, as the table shows, is that Republicans still dominate a majority of the states’ legislatures and governor mansions across the country. For now, the Compact is an unrealistic option.

Another solution could be for states to adopt what I call the Maine-Nebraska Model or what is also known as the “Congressional District Method“. These two states distribute their electoral votes using the following formula:

What if all the states adopted this Maine-Nebraska Model? Would it have affected the results of the 2016 presidential race?

The table below includes numbers for the actual outcome of the elections, while the next column looks at the results if we apply the Maine-Nebraska Model. The table also includes the number of Congressional Districts and states each candidate won. The last column shows who won the District of Columbia’s three electoral votes.

If all states had apportioned their electoral votes using Maine’s and Nebraska’s approach, President Trump would have still comfortably won the presidency. Should this disqualify this alternative to the EC?

Let us apply the Maine-Nebraska Model to the 2012 and the 2008 presidential elections.

Under the Maine-Nebraska Model, President Bush would have earned more electoral votes in both elections.

What can we learn from this analysis? If we agree we Senator Warren’s belief that we need to change the EC in order to force presidential candidates to campaign outside “battleground states”, the Maine-Nebraska Model accomplishes this goal. After all, would Maine or Nebraska have received any attention during the last presidential elections, if they distributed their electoral votes as the other 48 states?

It is important to note that Senator Warren would probably not support the Maine-Nebraska Model. But, her desire to eliminate the EC is unrealistic. Amending the constitution will not take place in the next years.

Republicans’ opposition to reforming the EC is understandable. If it was not for the EC, Al Gore and Hillary Clinton would have won their respective races. But if public opinion starts to turn against the EC, Republicans could propose that states adopt Maine’s and Nebraska’s approach as a measure that seems more democratic than the current electoral system.

Would this be good for democracy? It would be a step in the right direction. But the chances that states will adopt Maine’s or Nebraska’s approach is also a long shot. It is not in either party’s interest. By turning battleground states into battleground districts, the parties would have to adapt their campaigning structures and raise more money to target even more districts.

For now, it seems we will just have to accept the EC’s limitations as it is unlikely that Americans will be able to reform or replace the current electoral system.

1 thought on “Should We Reform the Electoral College? A Few Considerations”