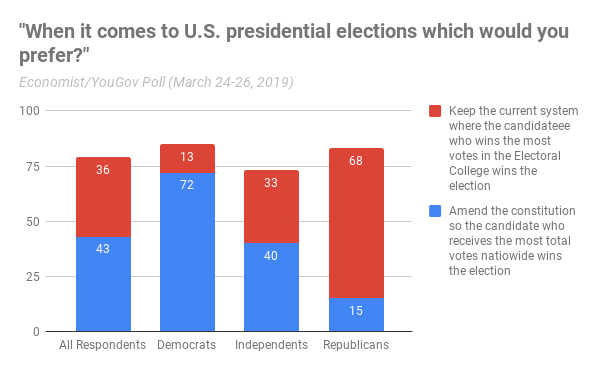 In my last post, I considered ways to reform the Electoral College (EC). One way is for states to join the National Popular Vote Interstate Compact (NPVIC). The other option is for states to adopt the Congressional District Method which Maine and Nebraska currently use to apportion their electoral votes.

I noted in my analysis that it was not clear what Americans currently think of the EC or the NPVIC. Luckily, this week’s The Economist/YouGov Poll asked its panel a number of questions connected to this debate. The results tend to be in line with Gallup’s 2016 findings, which I discussed in my last post.

While the last of these questions did explain how the NPVIC works, it is surprising how many Americans are not sure whether or not they like the idea.

What can we learn from this poll’s findings? Here are three observations, which largely reflect the country’s political mood.