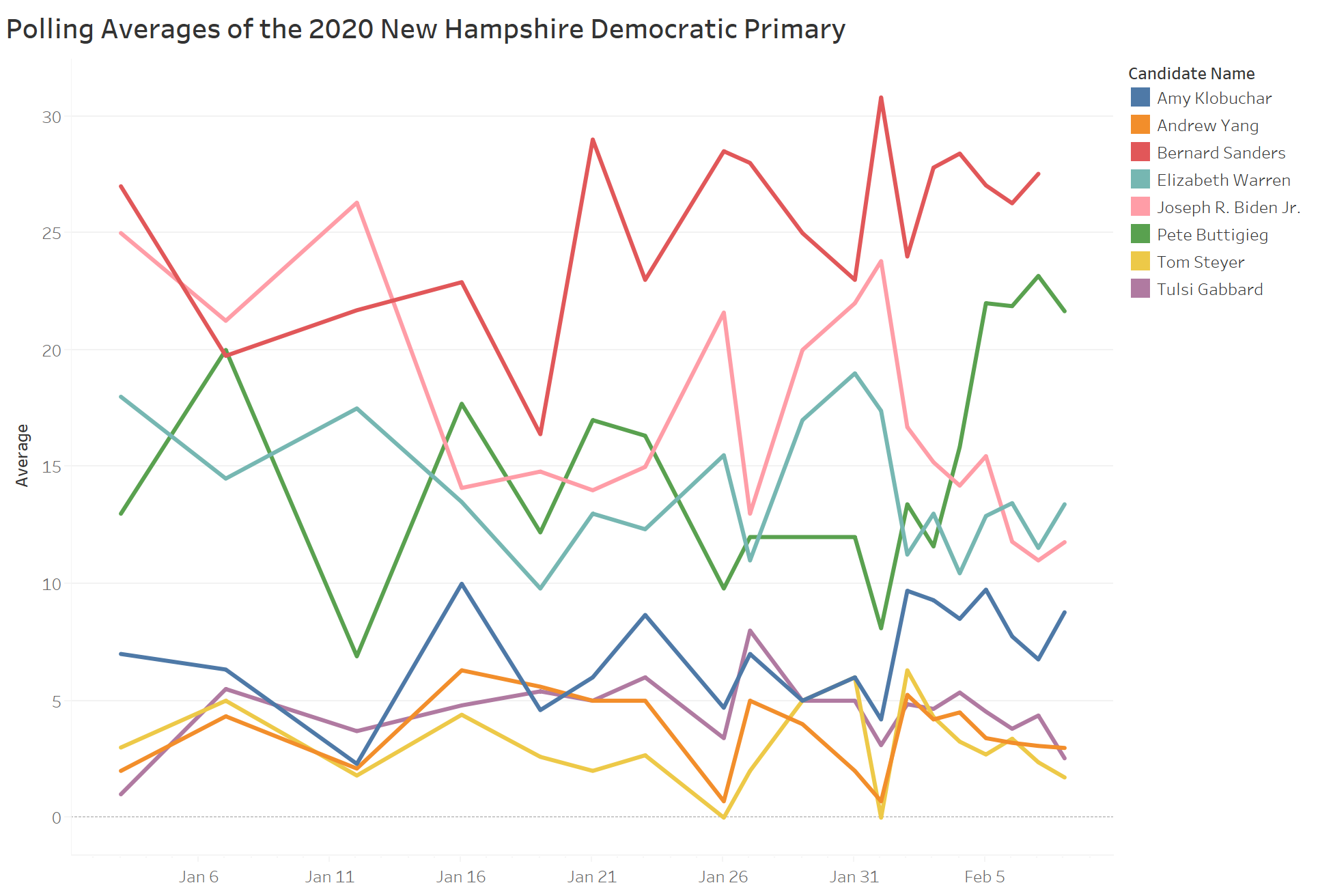 My Twitter feed was abuzz with videos and pictures of long lines of people waiting to see one of Pete Buttigieg’s rallies in New Hampshire.

Could Buttigieg pull off a surprise win in the New Hampshire primary? I collected all the polls conducted this year. In addition, I have calculated the average scores. To help us visualize the trends, I graphed these findings.

Here are a few quick observations:

1. Even though Buttigieg’s support has increased since his finish in Iowa, Bernie Sanders still leads by an average of 5%.

2. Buttigieg’s post-Iowa bounce seems to have subsided and Sanders’ support seems to be growing.

3. Buttigieg’s rise is not a threat to Sanders but to Joe Biden or Amy Klobuchar, who share his more moderate positions. Sanders’ main challenger is Elizabeth Warren. Thus, Buttigieg’s gains or loses are not necessarily affecting Sanders’s standing in the race.

4. Biden’s declining support explains why he has decided to reorganize his campaign. Failing to finish in the top three will hurt his campaign’s fundraising operations or its get-out-the-vote efforts in Nevada or South Carolina.

5. Klobuchar’s increasing support is modest, but it parallels Buttigieg’s small decline. As I noted in an earlier post, she had a strong performance in the last debate and it seems that voters are giving her candidacy a second look.

6. Warren’s fluctuations are also interesting. The graph indicates that she will come in third in the primary. Her sagging numbers seemed to have hurt her fundraising efforts and it may explain why her campaign has canceled television ads in Nevada and South Carolina, saving precious resources for the Super Tuesday primaries.

At point, I think that Sanders will win the New Hampshire primary, but Buttigieg could still pull off an upset. The latest CNN/UNH poll still shows that 28% of likely voters are still undecided. But, the Sanders campaign’s organizational advantage in New Hampshire should help the Vermont senator secure the victory.