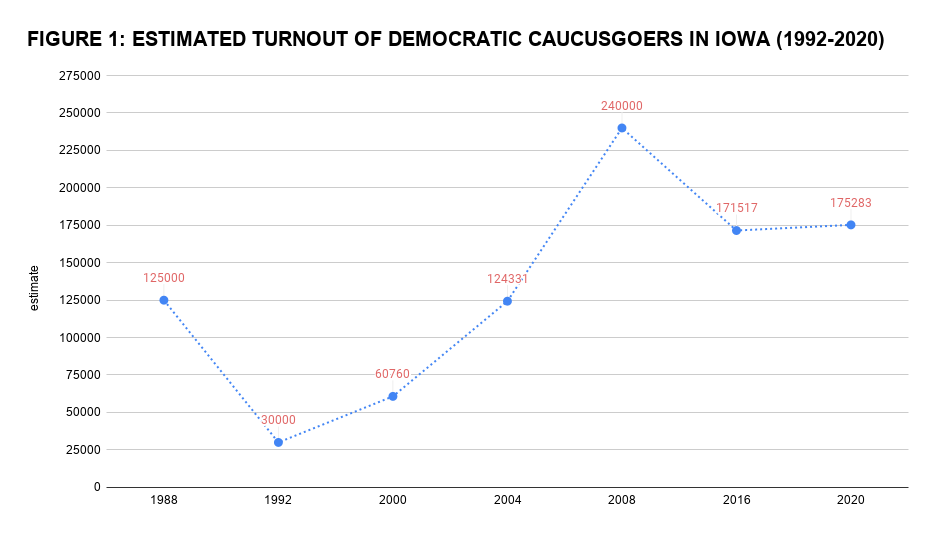 Like many observers, I thought that we were going to see an increase in the number of caucus-goers in Iowa. News reports suggested that the Iowa Democratic Party was expecting numbers closer to the record-setting caucuses of 2008, where around 240,000 voters participated in the nominating process. The Monmouth Poll of January 29, 2020, which documented Bernie Sanders’ rising popularity in Iowa and Joe Biden’s slide, indicated that its forecast assumed the turnout rate would be closer to 2008 than 2016.

Although the numbers may change as the Democratic National Committee has asked the Iowa Democratic Party to conduct a recount of the vote, the turnout rate is similar to 2016 as Figure 1 demonstrates.

The caucuses are only open to registered Democrats, though the rules allow participants to change their registration or register as Democrats at the caucus sites. Rather than looking at the total number of caucus-goers, we should measure the percent of “active registered” Democrats who participated in the caucuses.

Based on past trends, we can safely assume that the number of registered Democrats will increase and Iowa’s Secretary of State will publish new numbers in early March 2020 that should support this view. For now, we can average the observed increases since 2000 and estimate that the IDP’s voter roll will increase by around 24,191.

What may explain the lower than expected voter turnout in Iowa? One possible answer is that the campaigns failed to energize voters and to attract new caucus-goers. This year’s entrance poll demonstrates that for 37% of participants this was their first caucus. In comparison, the rate was 44% and 57% in 2016 and 2008, respectively.

Another reason could be voters’ difficulty trying to decide who to support. Caucuses are more demanding than primaries. They are communal events where participants publicly announce their preferences and they need to be ready to change their to support if their candidates fail to garner the backing of 15% of voters in the caucus. This process is tedious and puts undo pressure on voters. It may even explain why turnout rates in primaries are higher than in caucuses. Thus, caucuses should attract participants whom are certain about their choices rather than those who are undecided.

This year’s entrance poll reveals that over 36% of caucus-goers decided “whom to support” a “few days” before the caucuses. In comparison, these late-deciders represented 16% of caucus-goers in 2016. This discrepancy may suggest that many voters did not attend this year’s caucuses because they were unable to make a choice and, as explained below, the fact that we currently have 12 candidates in this race make this process even more difficult.

One final cause for the lower than expected turnout rate could be that there were too many candidates. The academic literature on choice overload may not only explain this year’s turnout but it could also shed light as to why many Democrats have been so angered by the caucuses’ results. This research argues that people are overwhelmed when presented multiple choices, forcing many to defer the choice or not make a choice altogether.

Writing April 2, 2019 in Politico Magazine, Lily Kofler, reacting to the growing field of Democratic presidential aspirants, used this research to predict that “too many options will, counterintuitively, result in lower satisfaction among Democratic voters – and possibly lead to lower enthusiasm and lower turnout.” Her prescient insights foreshadowed Democrats’ mixed emotions with the state of nomination process today.

While many Democrats are dissapointed by the turnout rate in this year’s Iowa caucuses, they should find some comfort that the number of caucus-goers increased slightly. Another positive outcome is the fact that the Iowa Democratic Party will likely add new voters to its roll. The challenge is not the lower-than expected turnout, but the fact that the results of the Iowa caucuses did not produce a clear winner or put enough pressure on weaker candidates to end their presidential aspirations.